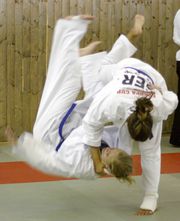 The Duo System is a discipline in which a pair of jutsukas from the same team show possible self-defense techniques against a series of 12 attacks, randomly called by the mat referee to cover the following scenarios: grip attack (or strangulation), embrace attack (or necklock), hit attack (punch or kick) and armed attack (stick or knife). The Duo System has three competition categories: male, female or mixed, and the athletes are judged for their speed, accuracy, control and realism. It is arguably the most spectacular form of ju-jitsu competition and it requires great technical preparation, synchronism and elevated athletic qualities. The jury shall look for and judge the following criteria:

The scores are given from 0 to 10 (1/2 number interval) by five judges.
Three scores get counted cause highest and the lowest scores are taken away to avoid mistakes.

This competition is even attractive for people not involved in martial arts. Fast and spectacular actions are shown. Precise kicks and punches, dynamic throwing techniques and powerful locks are performed by the contestants

View a competition video from the 2014 World Championships in Paris, France